Since the end of the 2nd World War and within the span of a couple of generations, the ethnic compositions of the Nordic countries have significantly changed. Through both voluntary and involuntary international migration, the traditionally net-emigrating Scandinavian countries have turned into net recipients of migrants. Whereas the magnitudes of these transformations differ between the Nordic countries – about a quarter of the current Swedish population is either born abroad or has a parent that is, with corresponding figures for Denmark and Finland being 13 and 7 per cent[1,2], respectively – the historical ethnic homogeneity of the Nordic region is, indeed, historical.

To understand the dynamics, mechanisms and societal outcomes of the contemporary multi-ethnic Nordic societies is of profound importance. While the Nordic countries differ in their histories, policies and public opinions on immigration and integration, the need to advance knowledge to minimize potential negative outcomes – such as exclusion, segregation, inter-ethnic frictions, and discrimination – and to maximize the benefits of a multi-ethnic society is a shared objective.

Nordic research on ethnic relations, integration and various forms of segregation have benefited greatly from available register data. Covering a broad range of topically relevant variables, Nordic register data constitute a unique and strategic resource for research and evidence-based policy making on ethnic relations and integration. Although Nordic register data correspond to near-complete populations, each with rich sets of relational sociometric data of prime relevance for the study of ethnic relations and integration, so far the existing register-based research is overwhelmingly done using conventional statistical frameworks that assume independence of observations. Consequently, the analyses and theories of ethnic integration seldom examine the detailed and complex network data available in the registers, to decipher social relations and interactions through which social systems are defined.

The network perspective offers a comprehensive analytical framework for studying social phenomena that encompass the micro-scale of individuals as well as meso- and macro-scale levels (families, communities and entire population) of societies. Beyond the practical application of network methods to relational data, network analysis also reflects the so-called 'relational turn' in sociology, where social relations and their constellations are brought to the analytical forefront. A network approach thus not only influences the possible answers we obtain to specific questions, but also has the potential to expand the type and form of possible questions per se. 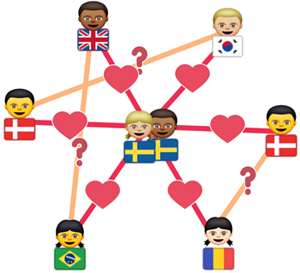 For example, in existing register-based studies on inter-ethnic family formations, the focus is overwhelmingly ‘native-centric’, emphasizing interactions between the native population and one or many non-native groups (e.g. Dribe & Lundh 2011). For instance, 'mixed-race' couples in the Nordic countries often mean 'a native person marrying an immigrant', unlike the more complex understanding prevalent in more multi-ethnic societies (Törngren, Irastorza & RodriguezGarcia 2019). As the share of the Nordic population with foreign backgrounds continues to increase, however, so does the importance of analysing the entirety of the complex network of inter-ethnic relations. With this change of perspective from native-centrism to the whole complex networks of interethnic relations, the present proposal recognizes that integration concerns relations between different non-native ethnic groups, an implication far more substantial than mere technical replacement of data and methods. A network approach thus has the potential to enrich the underlying substantive and theoretical concepts, such as the broadening of the notion of integration, and provide new ideas and impetus on how such concepts can be identified, analysed and theorized about on the basis of observed social interactions between humans.

Bringing together leading Nordic social-scientific research centers on integration and segregation with world-leading expertise on complex systems and network science, this project will build capacity and expertise in network-scientific register-based research on ethnic relations and integration. Funded through the NordForsk programme for interdisciplinary research, the project brings together scholars on inter-ethnic relations, families, integration and segregation in Denmark, Finland and Sweden with Nordic scholars in network science and complex systems for an ambitious interdisciplinary 4-year research programme. Guided by existing sociological research questions and existing collaboration structures between partners, three core topics in ethnic relations research will be approached from a network-scientific perspective: inter-ethnic family ties, labor market discrimination, and residential segregation. This project will produce cutting edge research publishable in the most prestigious academic journals and produce new and important knowledge about segregation and integration in Nordic countries. Integral to this, the project will also train a new cadre of entry-level scholars in the interdisciplinary area of network science and ethnic integration.

Beyond the academic novelty of this particular interdisciplinary combination, this project is of profound societal relevance with regards to findings, methods and, specifically, the network-based notion of inclusive integration. Arguing for and demonstrating the practical advantages of viewing integration in terms of the complete set of inter-ethnic relations, the notion and practical relevance of inclusive integration will be disseminated to policy-makers, social service providers, NGO:s and other relevant stakeholders in various ways, including a world-class interactive visual analytics platform aimed at both policy-makers and the general public. 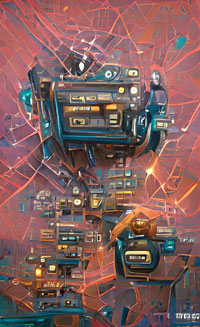 The overarching aim of the project is to study inter-ethnic dynamics in families, work places, and communities in order to build up novel capacity and expertise in the Nordic countries for doing networkscientific register-based research on ethnic relations and integration. This expertise will manifest itself in the form of two doctoral positions and four postdoctoral fellowships, scholars that together with key researchers will work in this novel interdisciplinary space to address questions within the three societal domains of ethnic integration.

Our project combines the major characteristic features attributed to the emerging transdisciplinary field of computational social science. At its foundation, the project is sociological, informed by existing theoretical and empirical research on inter-ethnic relations and integration. As the used empirical register data is relational in nature, conventional cross-comparative statistical methods are less suited here; rather, the modern computational, data and network science methods are needed, as they are capable in taking the dependencies in the network into account. Our approach is analytical, incorporating network-scientific methods that allow us to stretch beyond descriptive associations, to explore the social and hierarchical dynamics of human behavior that possibly could provide explanations of social phenomena and human sociality (e.g. Keuschnigg et al 2018).